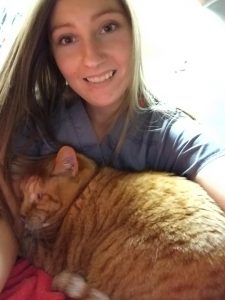 Amanda D. has been with out clinic since August of 2009.
She grew up in Mishawaka, IN where she attended and graduated from Mishawaka High School. Amanda currently has 3 animals. 2 dogs: Prince – Yorkshire Terrier and Zoom – A Shih Tzu. A cat named Pete. In Amanda’s off time, she enjoys spending time with her daughter and husband. 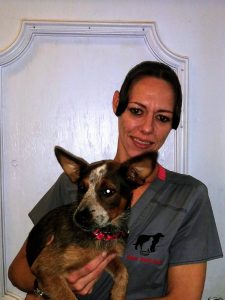 Amanda joined our team in December of 2017.
She was born and grew up here in Palatka, FL. She currently has 2 dogs named Dodie and Cloe. Amanda graduated from Palatka High School and attended St. Johns River State College. Amanda loves spending time with her two legged son Caleb, her 2 dogs, and her family outside of work. They enjoy fishing and going to the beach. 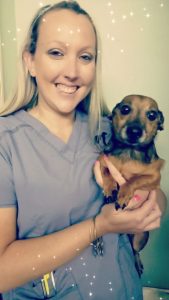 Julie has been with our clinic since February 2018.
She was born in Bayton Beach and grew up in Satsuma, FL. She has no pets at this time because her son is allergic to them. Julie graduated from Palatka High School. When is not working, she loves spending as much time as possible with her son! They enjoy going to the beach and riding bikes together. 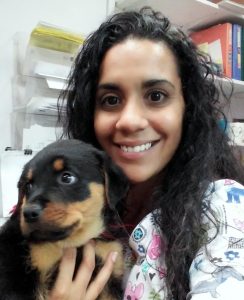 Vilmarie also known as “Vicky” has been with our clinic since May of 2013.
She was born in Aguadilla Puerto Rico. She currently has 3 dogs named Gus, Penny, and Rumple. She attended school at Isabela Puerto Rico and received a certificate in accounting. She loves reading, shopping, and spending time with her daughter at the park. 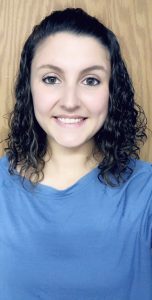 Shaley joined our team in October of 2018.
She was born in Ocala, FL but grew up here in Palatka. Shaley currently has 1 French Bulldog name Whiskey. She graduated from Palatka High School. In her down time, she enjoys spending time with her son, fishing, and crafting. 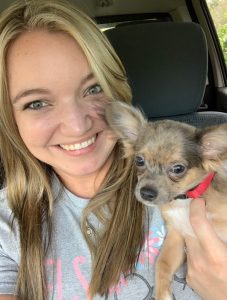 Kelcey grew up here in San Mateo and got her diploma from Putnam Banner Home School. She has spent a lot of her growing up time with the Roy Road Hunt Club, where she is still active today. With this background, Kelcey is definitely a hound lover. She has two basset hounds;( moose and Roger), a bloodhound (Houston), with a lab, (Harly), a Jack Russell and chihuahua (Lil Bit and Gus respectively) thrown in. She and her husband also have Walker Hounds.
Besides spending time with her husband, Corey, and her two daughters, Gracelyn and Henley, Kelcey spends time at the business they co- own, Hoot Owl Farm House. They serve the most delicious homemade ice cream.
Kelcey says she is glad to be back at her home base in East Palatka, where the Doctors and her co-workers have turned into family. She says “Being a Vet Tech is what I’m meant to do.” 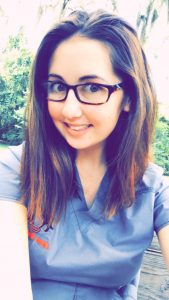 Erin joined our team in March of 2018.
She was born and grew up in Hastings, FL. Erin currently has 3 dogs. She has a lab muc named Buster and 2 Chiweenies name Precious and Betsy. She graduated from Interlachen High School. She enjoys fishing, swimming, and spending time with her 3 children: Bobby, Addison, and Noah.

Karli has been with our clinic since August of 2018.
She is an amazing technician who is a native to Florida. Karli has a turtle name Gucci and a dog named Cletus. Karli graduated from Palatka High School and is currently attending St. John’s River College. Her hobbies include hanging out with friends and school. 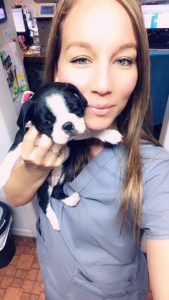 Linette joined our team on September of 2017.
She was born in Philadelphia, Pennsylvania and grew up in Puerto Rico. In Puerto Rico, she grew up caring for chickens, birds, and cows! This is where her love for animals started. She currently has 3 animals. A pitbull named Ivy, a cat named Rhino, and a bird named Romeo. In her free time, she enjoys salsa dancing, going to the beach, and spending as much quality time as possible with her 3 beautiful children and her husband. 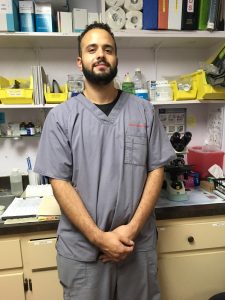 Erik has been with our clinic since August of 2014.
He was born at Flagler Hospital in St. Augustine, FL and grew up in Interlachen, FL. Erik currently has 11 animals. 6 dogs: Chestnut, Meghan, Boss, Diva, Cheepa, and Tiger. 1 bearded dragon name Bane. 2 Cockatiels named Squeaker ad Pito. 1 Cockatoo named Angel and a turtle named Speedy. He attended the P.K. Yonge Developmental Research School. While there, he was part of Drama Club, played football, and participated in band. Erik is part of the Herpetological Society. He enjoys fishing, swimming, and boxing in his off time. 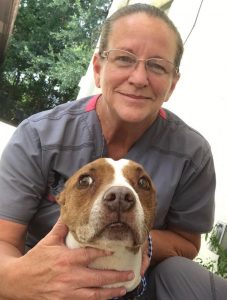 Robin has been with our clinic since June of 2013.
She grew up in Titusville, FL. She currently has 6 dogs: Sandy, Tater, Buster, Widget, Sammie, and Hope. Robin really enjoys working with animals. She loves going on cruises and spending time with her dogs. 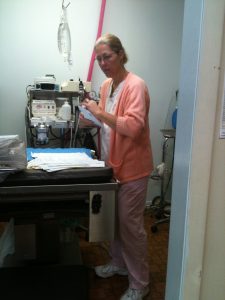 Judy has been working in the veterinary field since the late 80’s. She came to work for East Palatka in 2009. Judy was born in Maine, but grew up here in Florida. She has always been around animals as her mom had and Judy now has a boarding kennel in addition to working full time. Most notably, Judy grew up showing and obedience training Weimaraners.
Judy is a big supporter of SAFE, helping with pregnant mothers, orphaned puppies and helping with overflow. When it comes to the little ones, Judy seems to have the touch. 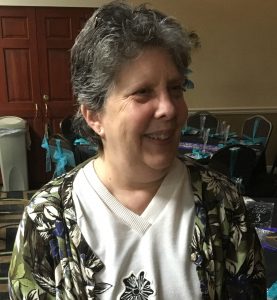 Doreen is our Do-It-All team member. Doreen has been assisting Dr. Smith since 1998!
She can do it all…well, except the doctor stuff. She is the go to person when there is a question or concern. She was born in Philadelphia and graduated from the University of Maine with a B.S. in Veterinary Science. She lives with her husband and 5 dogs named Bobby, Mona, Rio, Teddy, and Zeva. She likes reading, swimming, horses, and Zumba. She began her veterinary career in 1980 and had worked in the field since then. If you have a question, Doreen is your gal.